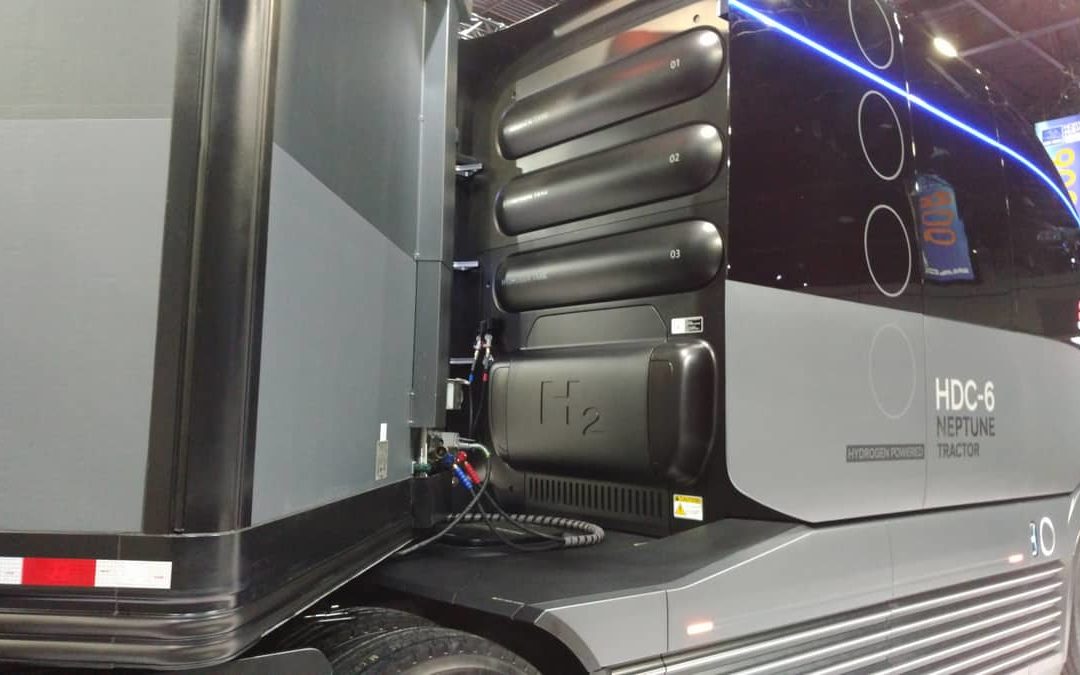 Hyundai Motor Co. (OTC: HYMTF), best known for its automobiles in the U.S. but a global manufacturer of heavy-duty trucks overseas, has jumped into the race to build a hydrogen fuel-cell heavy-duty truck.

The HDC-6 Neptune features a spacious cab positioned in the front of the tractor with full glass surrounding the driver, eliminating traditional blindspots through opaque A-pillars. Live video creates 270-degree visibility from the sides and rear of the truck.

The concept vehicle, which Hyundai’s Hak Soo Ha, vice president of research & development, said is actually a second-generation hydrogen truck, was displayed publicly for the first time at the North American Commercial Vehicle Show in Atlanta on Monday, Oct. 28, 2019.

Hyundai’s first-generation fuel-cell truck, the Xcient, was introduced in September and will go into testing next month in Switzerland.

Maik Ziegler, vice president of the company’s CV research & development strategy group, said the truck is hydrogen-only because the storage and battery capacity needed to add electric power requires too much space and weight. Initial trucks, however, will include some battery power, he added.

Sae Hoon Kim, head of Hyundai’s Fuel Cell Center, explained that the hydrogen fuel cell is the same system currently used in Hyundai’s automotive vehicles. It is a 95 KwH system that will be doubled for the truck during initial testing. It will have to be scaled further before production can begin, but Kim said the technology to do that is not an issue.

“When we commercialize this truck, we will have a higher-powered system,” he said.

No timetable was given on when this truck, which will launch globally and includes a U.S. model, will be available, with Ziegler saying it depends on the business case. Right now, that exists in Switzerland, but when it launches globally, the goal is to use renewable hydrogen as the fuel source.

The tractor features either left- or right-hand drive and includes two hydrogen stacks with up to eight storage tanks offering 600 to 800-mile range. The front grill wraps around to the sides of the vehicle to offer more opportunity for cool air flow to enter the vehicle to control heat buildup.

In addition to the wraparound windshield, the cab features two retractable steps and rotating seats for ease of entry and plenty of room on the interior. When in production, there will be sleeper, day cab and straight truck versions, although it’s unclear whether the U.S. will see all those variations.

All LED lighting is included and the front features a unique LED panel, located just below the driver, that can be used to display company logos or messages such as advertisements. Traditional headlamps have been removed, replaced by a thin string of wraparound LEDs. Cameras, which can also function as security cameras, replace the mirrors.

The tractor was carefully designed for global markets, and Ha said the company has a design advantage because it is the only manufacturer that also owns a trailer design and manufacturer. Its Hyundai Translead division introduced a refrigerated trailer concept at the show, the HT Nitro ThermoTech, that was part of the Neptune display.

“The fuel cell powertrain gave us the opportunity to redefine the classical typology and architecture of the truck,” said Luc Donckerwolke, chief design officer of Hyundai Motor Group. “The Hyundai Commercial Vehicles Design Team started with a white sheet of paper focusing on the new defined functionality resetting all standards in order to project commercial vehicles in the future.”

In September, Hyundai and engine maker Cummins (NYSE: CMI) struck a deal to develop and commercialize electric and fuel-cell powertrains for the North American market.

Hyundai fuel cell systems are comprised of fuel cell stacks that convert stored hydrogen into electricity, as well as sub-components for heat management and air supply among other processes for power generation. Fuel cells emit only clean water vapor.

Hyundai’s entry into the market is part of a bet that several other manufacturers are making. The most prominent effort is that of Nikola Motor, which is valued at over $3 billion following a $276 million Series D funding round announced in September, as it builds hydrogen-powered tractors for both the U.S. and European markets.

Nikola will eventually offer the Nikola One (sleeper model), the Two (day cab) and the European Tre (also a day cab). Nikola said its tractors’ motors produce up to 2,000 foot-pounds of torque and 1,000 horsepower for an effective range of 500 to 750 miles with a hydrogen refill time of less than 20 minutes. The Nikola Tre, to be sold in Europe and Australia, features a range of 500 to 1,200 kilometers due to a slightly smaller hydrogen fuel tank. Specific power details on the HDC-6 Neptune were not provided.

Nikola is planning to offer a single price to customers that includes the truck lease, maintenance, and fuel. It has said it has over 14,000 pre-orders.

Kenworth and another automaker, Toyota, have also teamed up and are currently testing a hydrogen tractor in the Port of Los Angeles. The $82-million project features Kenworth T680 tractors outfitted by Toyota to feature a hydrogen-electric power system.

Daimler is also investing in hydrogen, introducing a model in Japan last week under its Fuso brand.

General Motors is also studying fuel cells and last year showed a fuel-cell prototype, SURUS (Silent Utility Rover Universal Superstructure) platform, that was shown at the fall 2018 meeting of the Association of the United States Army.

According to GM, the concept is scalable, making it a potential solution for heavy-duty transport at some point.